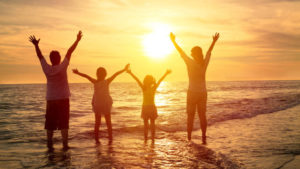 The Committee on Civil and Political Rights (CCPR) explains in its General Comment no. 19 on Article 23 (The Equality of Rights Between Men and Women):

1. Article 23 of the International Covenant on Civil and Political Rights recognizes that the family is the natural and fundamental group unit of society and is entitled to protection by society and the State...

2. ... Where diverse concepts of the family, “nuclear” and “extended”, exist within a State, this should be indicated with an explanation of the degree of protection afforded to each. In view of the existence of various forms of family, such as unmarried couples and their children or single parents and their children, States parties should also indicate whether and to what extent such types of family and their members are recognized and protected by domestic law and practice.

27. In giving effect to recognition of the family in the context of article 23, it is important to accept the concept of the various forms of family, including unmarried couples and their children and single parents and their children, and to ensure the equal treatment of women in these contexts (see general comment No. 19, paragraph 2). Single-parent families frequently consist of a single woman caring for one or more children, and States parties should describe what measures of support are in place to enable her to discharge her parental functions on the basis of equality with a man in a similar position.

Economic consequences of marriage, family relations and their dissolution

Here are some extracts (EgLex used the bold schrift to highlight certain phrases):

1. As stated in the Universal Declaration of Human Rights, the family is the basic unit of society. It is a social and legal construct and, in various countries, a religious construct. It also is an economic construct. Family market research has established that family structures, gendered labour division within the family and family laws affect women's economic well-being no less than labour market structures and labour laws. Indeed, women often do not equally enjoy their family's economic wealth and gains, and they usually bear greater cost than men upon the breakdown of the family and may be left destitute upon widowhood, especially if they have children and particularly where the State provides little or no economic safety net.

2. Inequality in the family underlies all other aspects of discrimination against women and is often justified in the name of ideology, tradition and culture. An examination of States parties' reports reveals that in many States, the rights and responsibilities of married partners are governed by civil or common law principles; religious or customary laws and practices; or some combination of such laws and practices; that discriminate against women and do not comply with the principles set out in the Convention.

4. The economic consequences for women of marriage, divorce, separation and death have been of growing concern to the Committee. Research conducted in some countries has found that while men usually experience smaller, if not minimal, income losses after divorce and/or separation, many women experience a substantial decline in household income and increased dependence on social welfare where it is available. Throughout the world, female-headed households are the most likely to be poor. Their status is inevitably affected by global developments such as the market economy and its crises, women's increasing entry into the paid workforce and their concentration in low-paying jobs, persistent income inequality within and between States, growth in divorce rates and in de facto unions, the reform of social security systems or the launching of new ones and, above all, the persistence of women's poverty. Despite women's contributions to the economic well-being of the family, their economic inferiority permeates all stages of family relationships, often owing to their responsibility for dependants.

5. Regardless of the vast range of economic arrangements within the family, women in both developing and developed countries generally share the experience of being worse off economically than men in family relationships and following the dissolution of those relationships. Social security systems, nominally designed to improve economic status, may also discriminate against women.

9. This general recommendation will serve as a guide for States parties in achieving a de jure and de facto egalitarian regime under which the economic benefits and costs of family relations and the economic consequences of their dissolution are borne equally by men and women. It will establish the norm for evaluating implementation by States parties of the Convention with respect to economic equality in the family.

11. States parties should guarantee equality between women and men in their constitutions and should eliminate any constitutional exemptions that would serve to protect or preserve discriminatory laws and practices with regard to family relations.

30. Women enter de facto unions for a variety of reasons. Some States provide a legal framework for recognizing de facto unions at some point, such as upon the death of a partner or the dissolution of the relationship. Where such legal frameworks do not exist, women may be exposed to economic risks when a cohabiting relationship ends, including when they have contributed to maintaining a household and to building other assets.

31. The Committee determined in its general recommendation No. 21 that the elimination of discrimination against women in de facto unions is included in State party obligations under article 16 (1). In States parties where such unions exist, and with regard to those relationships in which neither partner is married to another person or is in a registered partnership with another person, the Committee recommends that the State party considers the situation of women in these unions, and of the children resulting from them, and takes the necessary measures to ensure the protection of their economic rights. In those countries where de facto unions are recognized by law, the recommendations contained below apply mutatis mutandis.

35. When States parties provide for the possibility of making private contractual arrangements with respect to the distribution of marital and other property following the dissolution of marriage, they should take measures to guarantee non- discrimination, respect public order, and prevent abuse of unequal bargaining power and protect each spouse from abuse of power in making such contracts. These protective measures may include requiring that such agreements be written or subject to some other formal requirements and providing for retroactive invalidation or for financial or other remedies if the contract is found to be abusive.

Economic aspects during the relationship

36. A number of States parties retain discriminatory systems of property management during the marriage. Some retain laws stating that the man is head of the household, thus giving him the role of sole economic agent as well.

38. States parties should provide to both spouses equal access to the marital property and equal legal capacity to manage it. They should ensure that the right of women to own, acquire, manage, administer and enjoy separate or non-marital property is equal to that of men.

42. States parties should provide for separating the principles and procedure dissolving the marriage relationship from those relating to the economic aspects of the dissolution. Free legal aid should be provided for women without the means to pay for court costs and attorney fees, so as to ensure that no woman is forced to forgo her economic rights to obtain a divorce.

Dissolution of marriage by separation and divorce

43. Most laws, customs and practices relating to financial consequences of marriage dissolution can be broadly classified into two categories: distribution of property and maintenance after divorce or separation. Property distribution and post-dissolution maintenance regimes often favour husbands regardless of whether laws appear neutral, because of gendered assumptions relating to the classification of marital property subject to division, insufficient recognition of non-financial contributions, women's lack of legal capacity to manage property, and gendered family roles. In addition, laws, customs and practices relating to post-dissolution use of the family home and chattels clearly have an impact on women's post-dissolution economic status.

44. ... Interrupted education and employment histories and childcare responsibilities frequently prevent women from establishing a path to paid employment (opportunity cost) sufficient to support their post-dissolution family. These social and economic factors also prevent women living under a regime of separate property from increasing their individual property during marriage.

45. The guiding principle should be that the economic advantages and disadvantages related to the relationship and its dissolution should be borne equally by both parties. The division of roles and functions during the spouses' life together should not result in detrimental economic consequences for either party.

47. States parties should provide for equal formal and de facto legal capacity to own and manage property. To achieve both formal and substantive equality with respect to property rights upon the dissolution of marriage, States parties are strongly encouraged to provide for:

• Recognition of use rights in property related to livelihood or compensation to provide for replacement of property-related livelihood;

• Adequate housing to replace the use of the family home;

• The inclusion of present value computation of deferred compensation, pension or other post-dissolution payments resulting from contributions made during the marriage, such as life insurance policies, as part of the marital property subject to division;

•The valuation of non-financial contribution to marital property subject to division, including household and family care, lost economic opportunity, tangible or intangible contribution to either spouse‟s career development and other economic activity, and to the development of his or her human capital;

• Consideration of post-dissolution spousal payments as a method of providing for equality of financial outcome.

48. State parties should undertake research and policy studies on women's economic status within the family and upon the dissolution of family relationships, and publish the results in accessible forms.

52. The laws or practices of some States parties restrict the use of a will to override discriminatory laws and customs and increase women's share of inheritance. States parties are obligated to adopt laws relating to the making of wills that provide equal rights to women and men as testators, heirs and beneficiaries.

54. In its 1998 Statement on Reservations to the Convention, the Committee expressed concern about the number and the nature of reservations. It specifically noted that:

Neither traditional, religious or cultural practice nor incompatible domestic laws and policies can justify violations of the Convention. The Committee also remains convinced that reservations to article 16, whether lodged for national, traditional, religious or cultural reasons, are incompatible with the Convention and therefore impermissible and should be reviewed and modified or withdrawn. (para. 17)

55. With respect to reservations relating to religious laws and practices, the Committee recognizes that since 1998 a number of States parties have modified their laws to provide for equality in at least some aspects of family relations. It continues to recommend that States parties “take into consideration the experiences of countries with similar religious backgrounds and legal systems that have successfully accommodated domestic legislation to commitments emanating from international legally binding instruments, with a view to withdrawing reservations.